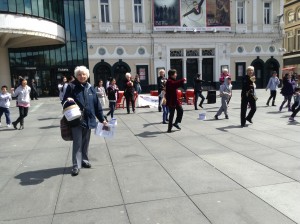 Nepal Earthquake Appeal – ‘So The Child May Live’

The Kanti Children’s Hospital in Kathmandu has been affected with the Nepal Earthquake and some areas, such as the Burns Unit and the Oncology (cancer) department have had to be evacuated as they are no longer safe to enter.  The hospital is packed with injured children, and more are still arriving as desperate families trek in from surrounding areas carrying them.  All the medical and nursing staff are working flat out, trying to save as many children as possible, and have put out urgent pleas for people to donate blood as there is no national blood bank service there.

Families are sleeping in the streets as they are too afraid to enter their homes in case they collapse  –  that is, if they are still standing at all.  It is raining now and in a few weeks the monsoon will be starting in earnest.

During our regular weekend rehearsal, we talked about things happened around us during the week. It was a week after the Nepal earthquake, so this was one of the topic.  We talked about the previous fundraising we had done with our former director and if the children want to carry on with the tradition to do some fundraising events for the Nepal victims. Every single child put their hands up – including the 5 years old. Parents were concern which charity we are going to.

Good old Facebook, a friend mentioned ‘So the child may live’ charity is looking for money for the Kanti children’s hospital in Nepal which has close connection with the Alder Hey Hospital.

Pagoda arts will be doing three days fundraising event on the 16th, 23rd and 28th May, street collection as well as performance in Williamson Square. Support us in any way please. It will means a lot to our children and young people, but mostly the children in Nepal.