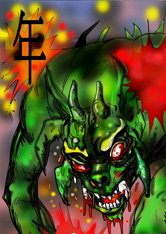 Pagoda Arts is so proud to have commissioned Jim McCarthy – Master of ‘Monster‘, to create the Monster of ‘Nien’. Our 8th series of ‘Our Corner’ will give you an in depth information about the Chinese New Year story, how and why the Chinese People celebrate New Year with dragon and lion dance, red paper and most of all, what do the unmarried young people do if they want to invite romance in the forthcoming year.

Jim McCarthy is a widely published illustrator/cartoonist and author. He has authored around fourteen books and has much comic graphic artwork published in the US and UK markets.

McCarthy’s books/graphic novels have been translated into foreign language editions in Russian, Czech, Spanish, French, Polish German, Italian and Croatian. Plus editions in Norway and Japan.

McCarthy’s career began working for many publishing houses in London amongst them 2000AD; for whom he created comic characters Bad Company, Bix Barton, The GrudgeFather, Kid Cyborg and worked on Judge Dredd etc.

McCarthy has immersed himself in American music forms and culture and this resulted in his first book being published by Hal Leonard in the USA called Voices Of Latin Rock.

The exhibition is open from 10 am to 4 pm, Monday-Saturday. Admission Free