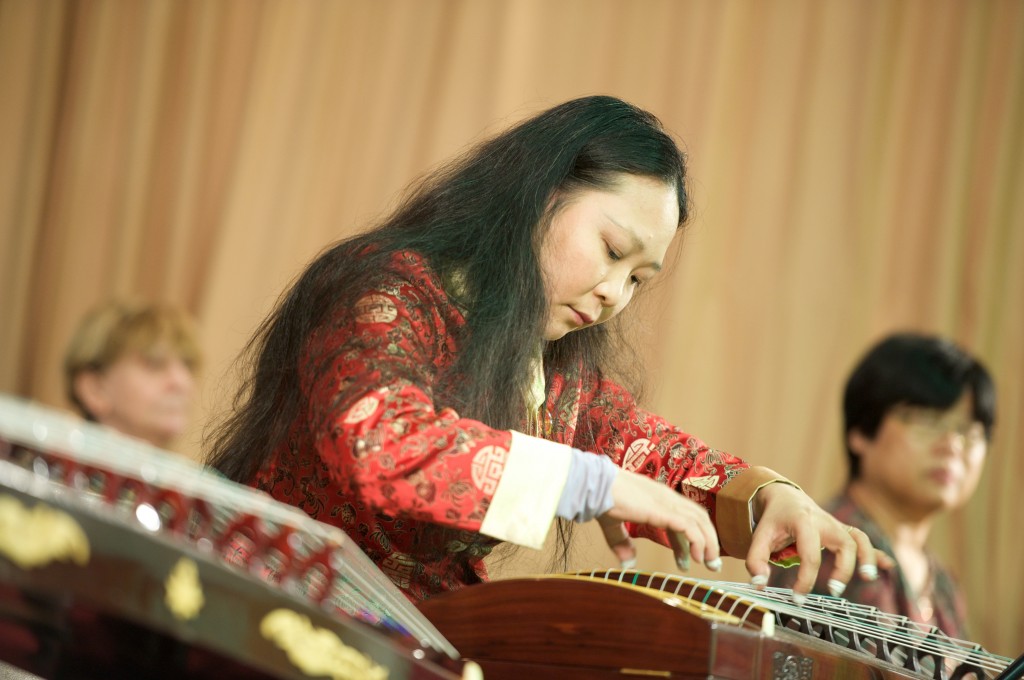 Zi Lan Liao is one of the leading exponents of Chinese music.  Her busy career on the international concert circuit has resulted in her being the most widely heard and best appreciated performer on the Gu-Zheng worldwide.

Zi Lan began to learn the Gu-Zheng at the age of three when she lived in Guangzhou. By the age of nine she was winning major prizes in China, including the prestigious National Youth Music Competition.  By the time she left China for the UK at the age of fifteen her reputation as a virtuoso performer was already established. She made an immediate impact on her arrival in the UK by winning at the International Eisteddfod in Llangollen.

She continued her music studies at Chetham’s School of Music and the Royal Academy of Music, now specialising in the western concert harp besides Chinese traditional dance and the Gu-zheng a fantastic twenty-one harp-like instrument in thousands of years of Chinese Dynastic tradition.

Zi Lan has captivated audiences around the world as a soloist with leading orchestras, as a recitalist and through the bubbling enthusiasm of her workshops.

She recorded music for the Oscar-winning
film “The Last Emperor”; she has collaborated with Peter Gabriel, Nigel Kennedy, Jah Wobble and other internationally known artists, and has appeared at most of the major UK concert venues, including the Edinburgh, Aldeburgh and World Harp Festivals. In 1996, she featured as soloist in the World Premier of  ‘The River’ Gu-Zheng Concerto with the Royal Liverpool Philharmonic Orchestra. Her collaboration with Jah Wobble – ‘Chinese Dub’ has won the best ‘Cross-Cultural Collaboration 2009’. In 2010, Zi Lan performed with the Royal Liverpool Philharmonic Orchestra again on the new composition ‘Oxbow’ written by Ian Stephens in Liverpool and Shanghai World Expo.

Zi Lan is deeply committed to making the music of her native country known in the West and has a rare talent for sharing her insight into its cultural setting and spirit. Despite her busy performance schedule Zi Lan still finds time to assist the Pagoda Chinese Youth Orchestra and Dance Group in Liverpool, both as musician and choreographer and, as visiting teacher, Chethams Music School and King’s College, besides giving workshops ‘nationwide’.