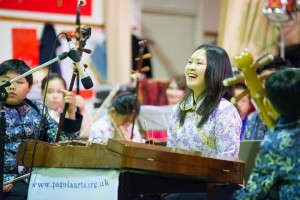 Kelly has been with the youth orchestra since 2009 and learns to play the Yangqin. With her dedications and motivation, Kelly soon became the first Yangqin with the orchestra and performed at the Shanghai World Expo in 2010.

In 2013, Kelly completed her Level 2 apprenticeship as Chinese culture worker and is currently completing her Level 3 youth work with us. Throughout the years, Kelly continues to develop her music skills, as well as developing other Chinese arts and culture elements at Pagoda Arts, such as: paper cutting, paper folding, calligraphy. In recent years, Kelly is leading workshops within the organisation as well as doing outreach works on various Chinese culture workshops. In 2014, Kelly becomes a member of the Pagoda Ensemble and performed in weddings, Chinese new year functions.